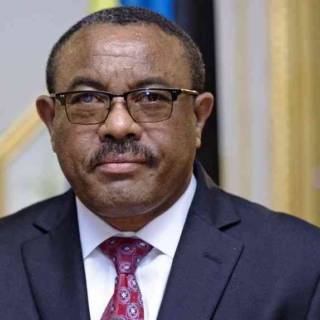 H.E. Hailemariam Desalegn Boshe is an Ethiopian politician who served as Prime Minister of Ethiopia from 2012 to 2018. He also previously served as Deputy Prime Minister and Minister of Foreign Affairs under Prime Minister Meles Zenawi from 2010 to 2012 and was the Chairperson of the African Union from 2013 to 2014.
Hailemariam received a bachelor’s degree in civil engineering from Addis Ababa University in 1988 and subsequently worked as a graduate assistant in the Arba Minch Water Technology Institute (now Arba Minch University). He earned a master’s degree in sanitation engineering from Tampere University of Technology in Finland, and upon his return to Ethiopia, served in different academic and administrative capacities, including the dean of the Water Technology Institute, for 13 years. In between, he also earned an MA in Organizational Leadership at Azusa Pacific University, California, US.

As Prime Minister, H.E. Hailemariam Desalegn was said to have sustained economic progress in Ethiopia after the sudden death of his predecessor in 2012. He ensured to complete the implementation of the Growth and Transformation Plan (GTP I) and to start with GTP II. Between 2012 and 2018, major projects like Hawassa and Mekelle industrial park, Addis Ababa Light Rail, Gilgel Gibe III Dam, the new Addis Ababa–Djibouti Railway, as well as a number of stadiums, have been completed. H.E. Hailemariam is credited for the country’s continued rapid and double-digit economic growth.

Financially, H.E. Hailemariam’s government welcomed its first sovereign credit ratings from global agencies in 2014 – a B1 from Moody’s and B ratings from both Fitch and Standard & Poor’s, which opened the door to international capital markets and foreign direct investment.