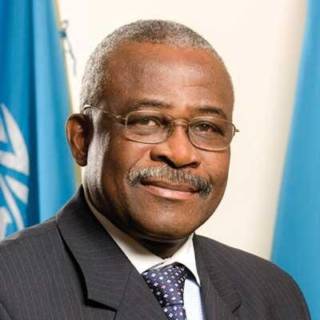 Dr. Kanayo F. Nwanze is the immediate former President of the International Fund for Agricultural Development (IFAD) and he began his term as IFAD’s fifth President on 1 April 2009. A Nigerian national, Nwanze has a strong record as an advocate and leader of change and a keen understanding of the complexity of development issues. He has over 40 years of experience across three continents in poverty reduction through agriculture, rural development and research. Prior to that, he was Director-General of the Africa Rice Center for a decade. Nwanze was instrumental in introducing and promoting New Rice for Africa (NERICA), a high-yield, drought- and pest-resistant rice variety developed specifically for the African landscape. In addition, Nwanze has held senior positions at a number of research centres affiliated with the Consultative Group on International Agricultural Research (CGIAR) in Africa and Asia, and he was instrumental in the establishment of the Alliance of CGIAR Centers. He started his international career as a post-doctoral researcher with the International Institute for Tropical Agriculture (IITA) shortly after his Ph.D. (1975) in agricultural entomology from Kansas State University, Kansas, USA. Nwanze also holds a Bachelor of Science degree in Agricultural Science from the University of Ibadan, Nigeria (1971). He received doctorate of science (DSc) degrees honoris causa from McGill University, Canada in 2012 and University of Warwick, UK in 2015. He has published extensively and is author of “A Bucket of Water”: Reflections on Sustainable Rural Development, 2017.

Dr. Kanayo F. Nwanze, was awarded the inaugural Africa Food Prize in 2016 for his outstanding leadership and passionate advocacy in putting Africa´s smallholder farmers at the centre of the global agricultural agenda.