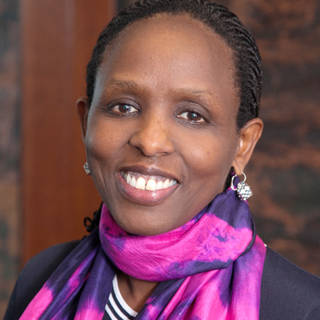 Dr. Kalibata joined AGRA as its President in September 2014. She leads the organization’s efforts with public and private partners to ensure a food secure and prosperous Africa through rapid, inclusive, sustainable agricultural growth, improving the productivity and livelihoods of millions of smallholder farmers in Africa.

Under Dr. Kalibata’s leadership, AGRA is working to increase the incomes and improve food security for 30 million farming households in 11 African countries by 2021 through targeted investments to strengthen 3 core areas: State capability and policies; input delivery systems in agriculture: and partnerships for inclusive agricultural growth

Prior to joining AGRA, Dr. Kalibata was Rwanda’s Minister of Agriculture and Animal Resources (MINAGRI) from 2008 to 2014, where she drove programs that moved her country to food security helping to lift more than a million Rwandans out of poverty.

Dr. Kalibata sits on various boards, councils and commissions including the Global Commission on Adaptation, the Global Agenda Council of the World Economic Forum, the Malabo-Montpellier Panel, the Food and Land Use (FOLU) Coalition, the Architecture for REDD + Transactions (ART), the International Fertilizer Development Corporation (IFDC), Bioversity International, and Africa Risk Capacity, among others.

She has a distinguished record of accomplishment as an agricultural scientist, policy maker and thought leader.  She served as the Special Envoy of the UN Secretary-General for the 2021 Food Systems Summit, accelerating action to transform food systems around the world to achieve the Sustainable Development Goals. She was also awarded the Yara Prize, now the Africa Food Prize, in 2012, Honorary Doctorate from the University of Liège in 2018, and the National Academy of Sciences’ Public Welfare Medal in 2019 for her work to drive Africa’s agricultural transformation through modern sciences and effective policy thereby improving livelihoods of stallholder farmers. She holds a doctorate in Entomology from the University of Massachusetts, Amherst.