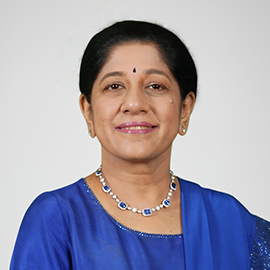 Mallika, a thought leader, strategist, and a well-known philanthropist with an abiding interest in ensuring development of agriculture, education, and healthcare in India, is recognized for entrepreneurship, commitment to excellence and contribution to Indian agriculture machinery business and academia.

She is presently the Chairman and Managing Director of Tractors and Farms Equipment Ltd (TAFE) and serves on the Boards of AGCO Corporation – USA and TATA Steel Limited. She is additionally the Chairperson of the Public Enterprises Selection Board (PESB), Department of Personnel & Training under the Ministry of Personnel, Public Grievances & Pension, Government of India. She is also on the Global Board of U.S.-India Business Council (USIBC), a core member of the BRICS Women’s Business Alliance (BRICS WBA).

Her awards include the prestigious Global Corporate Leadership Award 2021 by the U.S.- India Business Council (USIBC), the Business Woman of The Year Award at the ETPrime Women Leadership Awards 2020, the Outstanding Woman Entrepreneur Award at The Economic Times Family Business Awards 2018, the Devi Award 2016 by The Sunday Standard for ‘Putting Farmers First’, the Business Thought Leader of the Year 2012 at the NDTV Profit Business Leadership Awards, the esteemed ABLF – Woman of Power Award 2011 by the Asian Business Leadership Forum (ABLF), and was voted the Entrepreneur of the Year by Ernst and Young in 2011.

Her accolades include the Honorary Doctor of Science (Honoris Causa) by the Tamil Nadu Agricultural University (TNAU) in September 2017, in recognition of her contribution to global agriculture, machinery business and academia, and the Doctor of Letters (Honoris Causa) by Hindustan University of Technology & Science, in October 2012.

The Government of India also conferred her with the prestigious Padma Shri award for her contribution to Trade and Industry in January 2014.

She had an exemplary career over the last 35 years in establishing Tractors and Farm Equipment Limited (TAFE) a key player in the agriculture value chain through its mass manufacture of tractors and farm machinery.

She brings invaluable lessons from her work in India and her deep understanding of the sector.