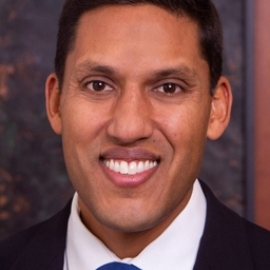 Dr. Shah brings over twenty years of experience in business, government, and philanthropy to The Rockefeller Foundation.  Appointed as USAID Administrator by President Obama in 2009, and unanimously confirmed by the Senate, Dr. Shah was charged with reshaping the $20 billion agency’s operations to provide greater assistance to pressing development challenges around the globe. By elevating the importance of innovation, promoting public-private partnerships, rethinking internal practices, and shifting how dollars were spent to deliver stronger results, Shah secured bipartisan support that enabled USAID to dramatically accelerate its work to end extreme poverty.  Despite partisan gridlock on many issues, two significant Presidential priorities – Feed the Future and Power Africa – passed the House and Senate with bipartisan support and were signed into law by President Obama, and the Global Food Security Act is the second largest global development legislation after PEPFAR.  Shah’s work delivered results for countries facing democratic transitions, post-conflict situations, and humanitarian crises, and is widely credited with providing life-saving access to food, health, and water for millions of children across the planet.

When Dr. Shah left USAID in 2015, he continued to follow his passion for creating opportunities for communities to thrive in the developing world by founding Latitude Capital, a private equity firm focused on power and infrastructure projects in Africa and Asia. He was also appointed a  Distinguished Fellow in Residence at Georgetown University.

Raised outside of Detroit, Michigan, Dr. Shah is a graduate of the University of Michigan at Ann Arbor, the University of Pennsylvania School of Medicine, and the Wharton School of Business.  Prior to his appointment at USAID, Shah served as Chief Scientist and Undersecretary for Research, Education and Economics at the United States Department of Agriculture.  He also served in a number of leadership roles at the Bill & Melinda Gates Foundation, where he helped launch the Alliance for a Green Revolution in Africa (a joint venture by the Gates and Rockefeller foundations) and the International Financing Facility for Immunization (credited with raising more than $5 billion for childhood immunizations worldwide) and where he supported the creation of the Global Development Program. He and his wife, Shivam Mallick Shah have three children.

The VALUE4HER Women Agripreneur of the Year Awards (WAYA) recognises women agripreneurs who have excelled in different segments of the agricultural value chain and shown remarkable innovation in their businesses. The VALUE4HER WAYA Award was launched in 2018 then implemented in 2018 and 2019 consecutively by The technical Centre for agriculture and rural cooperation- CTA in collaboration with African Women in Entrepreneurship Forum (AWIEF). This was then transferred to AGRA under a mutual agreement at the close of CTA’s mandate. AGRA continues to invest in scaling this initiative by catalysing actions towards women’s excellence in agribusiness.

This award aim to create visibility for successful women, trigger innovation and spur ambition among women agripreneurs and promote successful women entrepreneurs as positive role models. The Award goes to women who have achieved significant recognition and business success in the field of agriculture and agribusiness with great impact on food security in their communities or countries.

The African Resilience and Investment Series for Women Executives (ARISE) program, a COVID 19 recovery program implemented in partnership with RENEW LLC was designed to assist  women-owned and led agribusinesses negatively affected by the COVID-19 global pandemic to build stronger, resilient businesses. The 10-month program offers tailored modules for investment seminars, executive management business training,  peer to peer emotional support & networking. The investment seminars provide women with the basics on securing third-party financing, be it debt, private equity, or grant funding. The executive management training focus on building business disciplines of management, which are often lacking in SMEs and their middle managers. The program seeks to reach 2,000 women-owned and led agri-SMEs through training and support in order to help them build executive and managerial skills, to increase their investment readiness acumen and to coach them on investment pitching.

#VALUE4HERConnect is an integrated digital agribusiness intelligence platform aimed at facilitating growth and development of women owned agribusiness enterprises. As a market shaping platform for women in agribusiness, VALUE4HERConnect enables visibility and business networking, facilitates easier access to business resources such as finance and other assets, markets and trade opportunities, while build collective capital and voice. The platform serves as a first point of call for women who desire to growth their businesses and trade in African and global agricultural markets. The platform also serves as an important business development and capacity development resource for members of the multifaceted community. It creates an avenue through which women agripreneurs and those who support them and seek to do business with them can easily reach out to them and to one another, share and access strategic resources and services.

To strengthen the Women2Women pillar, the platform has integrated unique networking sessions namely TalkCorner. VALUE4HER TalkCorners are a special feature of the platform aimed at spotlighting successful women agripreneurs to increase their visibility, confidence and share lessons of their entrepreneurial journey with other women. TalkCorner sessions have facilitated meaningful partnerships and mentorship relationships among women. It also creates an opportunity for women to profile and market their business.

The specific objectives of the VALUE4HER TalkCorners are to:

“After the event I got quite a number of searches and invitations on my LinkedIn profile and got invited to attend a webinar by Executives in Africa. I was also invited to be a panelist in the Value4her Advocacy Nigeria event held in March” – Agnes Fasehun

AGRA has positioned VALUE4HER as the voice of African women in agriculture, in this regard periodic webinars are hosted around key dates and key events for women empowerment. The advocacy convenings seeks to foster a collective messaging to facilitate change is gender social norms and development of policies favourable for women’s active participation in national and regional economic activities. The VALUE4HER advocacy events/meetings feature prominent national, regional and global policy makers, they also facilitate dialogue among women agri-entrepreneurs and key industry players.

The specific objectives of VALUE4HER advocacy meetings are to:

T&C Statement
By registering, you agree to the processing of your data by AGRA as described in our Privacy Policy