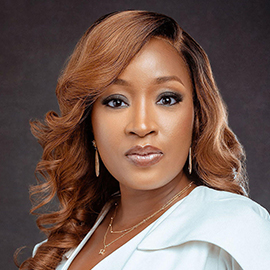 Ada is the Forbes Africa Businesswoman of the year 2021. As an award-winning entrepreneur, investor and passionate African development advocate she has a successful track record with 18+ years’ experience in entrepreneurship, investment banking, private equity, development finance, public policy and startup venture-building.  She is Managing Partner of Agrolay Ventures, an investment firm that deploys capital to early-stage companies, with a focus on food and agriculture in Africa. She’s also the Founder of Nuli, an innovative farm-to-table beverage brand and restaurant chain that uses fresh, locally grown agriculture produce.

Ada serves on the Boards of private equity fund, Factor [e] ventures, the global agriculture non-profit, One Acre Fund and the leading plant-based food distributor in Africa, Infinite Foods. She is a member of the African Development Bank’s (AfDB) Presidential Youth Advisory Group and serves on the Advisory Group of Generation Africa, an initiative to invest in young African agripreneurs co-catalysed by Econet and Yara International. She is the interim Chief Operating Officer of the World Hunger Fighter’s Foundation (WHFF), a non-profit, founded by Dr. Akin Adesina, to invest in young food innovators for a hunger-free world.

For three years Ada served as Senior Adviser to Dr. Adesina when he was Nigeria’s Minister of Agriculture, launching novel initiatives that attracted millions of investments to Nigeria’s agribusiness sector. Prior to her public service she was VP at Kuramo Capital, a New York-based private equity firm, and was a Senior Investment Officer at the AfDB. She began her career as an Analyst at BNP Paribas investment bank, London.

She is a Young Global Leader of the World Economic Forum and an Archbishop Desmond Tutu Leadership Fellow. Consecutively, from 2016 to 2020, Forbes Africa listed her as one of the Top 100 Africans contributing to economic impact on the Continent. She has also been a recipient of the Entrepreneur of the Year and Achiever in Agriculture Awards in 2015 and was on the Forbes 20 Youngest Power Women in Africa list in 2014.

She is a frequent speaker at conferences on topics ranging from agribusiness, venture investing and women in business.In July 2020, Ada was the Convocation Speaker for the Kellogg School of Management graduation, becoming the youngest person and the first African to be given the honour and only the fourth black person, one of which was Oprah Winfrey.